JSMQG Gives to the Homeless in Howell

I needed some time to absorb everything before I could attempt to write about my visit to the homeless encampment but here goes. 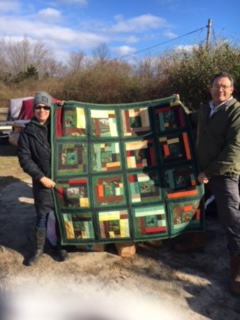 As most of you all know, I had been in contact with “Minister Steve” Brigham, as he is so fondly referred to by his fellow residents,  about the guild donating quilts to the homeless encampment in Howell. All of you may not know that the bulk of the residents there are people who had been living in Tent City in Lakewood until they were forced to leave. At that time Howell let them use a parcel of land that belonged to the township and then without warning sold the property out from underneath them, a provision of the sale being that the new owner had to find them a place to set up camp. Well to make a long story short no one has done that or made any effort to do it and these folks are once again staring down eviction. When I first contacted Steve I was trying to get a census so to speak about the residents and that is when I found out that most of the thirty residents had relocated to different areas in the woods in anticipation of the eviction and that only six had still remained. Of those six one is the minister himself and his assistant, Cindy.

I managed to put together six decent size quilts from our charity stash and gave them a label and last Thursday I set out to the camp to meet with Steve. (Side note I had also thrown out if anyone had warm clothing and such they wanted to donate that I would be willing to collect and deliver as well. Deb Loeb and Sherre were kind enough to pack some things up. Deb Loeb, you know those shoes and boots you weren’t sure anyone would want, fear not they were a huge hit!). I brought my husband along for the ride and followed the directions that were shown on the Facebook post of Howell Happenings that I had shared. I’ve probably driven past the dirt road that leads to the camp, right off Route 9 nestled amongst a shopping Mecca, hundreds of times but little did I know. The dirt road   doesn’t go very far before you enter the camp. There are tents, as in camping tents, makeshift tents, abandoned rvs, cars and buses all set up around a circle, these are their homes. Homes that they are proud of, homes that are well taken care of, homes with beds made,  homes that are in jeopardy now. I was so afraid that I would be emotional there but strangely I was not. I was greeted by Cindy first because Steve was on the phone. I didn’t know if she was aware of why I was there so I proceeded to tell her about the guild and the donation. She helped me unload the trunk and when I showed her the box with the quilts, it was like a child on Christmas morning! She was so excited yet somewhat spellbound that someone would give her and her neighbors a handmade quilt.  She couldn’t wait for the others to be home later so she could hand them out.  Steve was equally delighted, I don’t think he realized before that these were handmade quilts we were gifting. I stayed for quite some time there and talked with the two of them. Cindy expressed a desire to learn to sew and maybe help teach some of the struggling women a craft they could use. I would be happy to oblige. Steve invited me to a screening of a documentary made about Destinys Bridge and how he is fighting a town to save his people from eviction, that happened to be that same night. I had to juggle a few things but I went that night to the Toms River library to see the film. I was greeted by Steve and Cindy like an old friend, hugged and kissed, like we’d been friends for years. We couldn’t stay for the whole film but I bought a copy, both to support Destinys Bridge and so that I could watch it at home in its entirety. I will bring it to the next meeting. Anyone who wants to watch is welcome to borrow it. 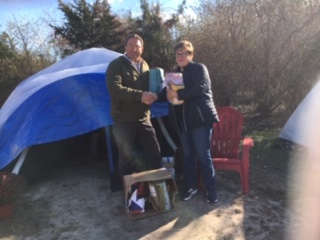 I have so many feelings about this donation, I can’t even begin to put them into words. What I can say is that this gift we share, it never gets old. It really doesn’t.  I would love to keep donating to these folks, I really would. Thank you all for letting me do this.

You can read more about this homeless camp here.

One thought on “JSMQG Gives to the Homeless in Howell”